The world of iOS, Android, Blackberry and Windows real money gaming is changing rapidly.  In this section we'll be bringing you all the latest news stories, analysis, discussion on the hot topics & videos of the best real-money iOS Texas Hold'em and Omaha cash games.

THE TOP 5 MOST COMMONLY ASKED QUESTIONS

Is it possible to install real-money poker apps from the Apple App Store?
That will depend largely on where you live.  The legality of mobile gambling differs from country to country, so Apple only permit gambling apps in certain jurisdictions.  Typically most poker apps are available from the App Stores in the United Kingdom, Ireland, Spain, Germany, Australia, Canada, Sweden, Russia and many others.  Gambling apps are not permitted in the United States App Store although U.S. players can still use any of the web based apps listed here.

Are there any United States friendly iPhone, Windows Phone or Android poker apps?
Mobile poker sites are not allowed to offer their apps for download directly from Google Play, the Windows Phone Store or the App Store in the U.S.A.  Thankfully a number of poker rooms have developed HTML5 versions of their clients that can be played from any Safari, Internet Explorer or Chrome browser.  You can find more information in our U.S. Poker Apps page.

What poker variants are available on the iPhone and iPad?
Obviously Texas Hold'em is the most popular poker variant in the world so that is available on every iOS compatible poker site.  7-Card Stud and Omaha Hi/Low are also available from a limited number of other iPhone poker rooms.

Can I play tournaments from my smartphone or tablet?
Yes, although some of the older apps still only offers Texas Hold'em ring games most of the newer apps now offer a Sit & Go and Multi-table tournaments.  Freeroll tournaments are also available from selected rooms.

Are there any apps that will teach me how to play Texas Hold'em?
Yes, there are a growing number of schooling apps available that will teach beginner players the basics of the game.  Intermediate players are also well catered for with a selection of poker strategy and odds calculator apps.  You will find detailed reviews along with screen captures of these in our resources section.

Still haven't found what you were looking for?  Visit our F.A.Q. section for answers to other popular queries. 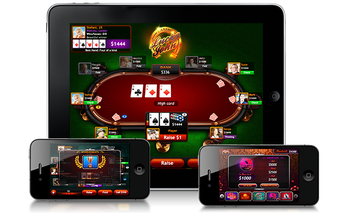 Playing poker on the go has always been a fascinating concept, but the obvious limitations of  the pre-smartphone era mobile devices have made it pretty much impossible. The release of iPhone and Android-based smartphones changed all of that and most of the major poker rooms recognized a perfect opportunity to provide the players with what they’ve wanted for a very long time. As a result, the online poker market has been flooded with a massive number of quality iPhone apps developed by industry giants, as well as new, mobile-only companies trying to make a name for themselves in this exceptionally competitive field.

Unlike desktop-based poker clients, those apps tend to vary significantly in terms of available poker variants and game modes, so choosing the right iPhone-poker room can be rather troublesome if you don’t follow a guide like the one available on this site. Nevertheless, most of those iPhone poker apps have one thing in common – namely, the competition tends to be considerably softer than on desktop-only sites. Even if a room uses the same player pool for mobile and Mac/PC users, mobile-enabled tables are going to come with more fish, giving you a unique chance to maximize your profits without significantly expanding your skillset. The explanation for this phenomenon is rather simple – mobile players are less likely to approach the game with a serious attitude, so even when there’s real money on the line they probably won’t be as tough to crack as the regulars you’d be facing at a desktop-only poker table. As a result, if you come prepared, you’re more than likely to find out that playing poker Apple-style can become quite a lucrative endeavor despite the technical limitations of the available software.

Despite the massive gap between the first smartphones and an iPhone 5, the limitations of mobile poker software are still considerable, especially if you compare them with desktop-based clients. For starters, the screen real estate is extremely limited, so most rooms come with a rather simplified table view, often cutting on features like chat room. Consequently, you won’t be able to use any third party tracking software, but the biggest issue is the fact that most iPhone poker apps offer no multi-tabling functionality whatsoever. Quite obviously, these shortcomings might sound like a deal-breaker to any serious grinder at first, but it’s important to remember that mobile apps aren’t really there to directly compete with PC and Mac software. They allow you to play poker whenever your unable to reach a more capable machine – and in the end, the capabilities of iPhone poker apps are growing on a monthly basis and each update or new release brings them closer to top-notch software packages we can enjoy in the comfort of our homes.

Quite obviously, long-time online poker players may not exactly be impressed by the capabilities of modern mobile apps, but it’s worth remembering that the beginnings of desktop-based poker were even more humble. In the end, there’s no getting away from the fact that iPhone poker is gaining popularity with every passing month, and if history of poker taught as anything it’s that it’s the influx of new players that brings the sharks money. Naysayers are free to pass on this opportunity – I know I won’t.