﻿﻿Playing poker on your phone has long been a problem for players based in the US.  Apple's refusal to offer downloads of real-money gambling apps from the US version of the App Store on iTunes meant that Americans were unable to play poker from their iPhone or iPad for many years.  The good news is legal poker apps are finally available in North America.
Internet poker remains a contentious issue in many US states so you still can't download your favourite PokerStars or Full Tilt app from the Apple App Store.  Thankfully a number of online sites have now developed mobile poker clients that can be played instantly on any device that has a browser and an internet connect.  Simply browse to any of the sites listed below from your iOS, Android or Windows Phone device and you can start playing cash games, tournaments or fast-fold poker without the hassle of having to download any software.  Deposits can be made quickly and easily via credit cards, cash transfers or Bitcoin.

THE GROWTH OF THE U.S. ONLINE GAMBLING INDUSTRY 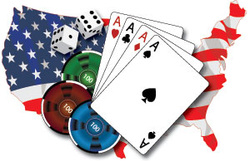 It seems a heck of a long time ago from the ‘boom’ years of the online gambling industry. The early to mid-2000’s saw an unprecedented amount of online gambling sites pop up from all around the world, but it was the US that really lead the line.

2006 saw the introduction of the Unlawful Internet Gambling Act and the crash in 2008 was a colossus one and some very, very dark days for a huge number of people from within the industry lay ahead. But, 2013 seemed to be the first year since the crash that online gambling within the US saw a little light at the end of the tunnel.

Whilst the online industry was outlawed throughout the US, two states managed to successfully get this prohibition over turned in the form of Nevada and Delaware. They got state licenses offering the use of online gambling to anyone who lived or was visiting each respected state. As yet, development has been slow from both, but early 2014 saw yet another break through.

New Jersey was the third fully licensed state to be granted a license, except this time they were a lot more proactive. They teamed up with Virgin Casinos and from there have laid plans a foot to bring in a number of online gambling retailers to trade from within their state.

The fact that New Jersey has been so proactive in their approach – compared with the other two licensed states - will likely be a huge step forward for online gambling throughout the US. The numbers thrown about are astronomical with an estimated $1billion in revenue coming just from gambling alone in the state of New Jersey.

THE LEGALIZATION OF ONLINE POKER, SPORTS BETTING & CASINOS SPREADS ACROSS THE U.S.

The domino effect simply has to follow this and we are likely going to see a lot more states following suit in the not too distant future. Talks of California submitting an application have already been muttered and many more will likely follow.

The big question is, can online gambling in the US get back to where it was?

A very tough question to answer as this very, very early stage, and we may not know the answer to this for another five years or so. But, there are positive signs moving forward for the US and with each successful application will make any number of states starts to sit up and take note.

2014 looks set to be an extremely exciting year for both online and mobile gambling in the United States.  Keep up-to-date on all developments by following us on Twitter or Google+