PLAY BOVADA POKER IN THE USA

It’s been just over a year since Bovada left the poker industry, but it’s definitely good to have one of the best poker brands around back. The history is quite confusing if truth be told, with migrations to Ignition gaming and also playing under the Bodog brand causing quite the derailment for Bovada.

But, the company are back after their gap year and we will be looking to see if they’ve learnt anything in that time. Today’s review will be focussing on the iOS web app, but they offer the same offerings on the Android app as well, if that’s more your thing. ​

The welcome bonus is worth up to $500 for new accounts at Bovada and is one of the more generous on offer. What we liked about the promotion is that you were able to clear as much or as little as you liked. But, you don’t need to clear the full amount to get hold of at least some of your bonus, which is good, especially for lower stakes/volume players.
​
The process is pretty simple; your bonus is a 100% match of your opening deposit and with it you then need to work through your bonus by playing real money games. You will need to hit certain points milestones to claim a part of the bonus. For example, claiming 15 points will get $5 in bonus money. Next, you need to hit 85 points for $15 in bonus money and so on. You earn points by playing real money games, with tournaments getting you 3 points for every $1 in fees and cash games getting you 1-3 points for event $1 in rake paid.
​

The first thing that you will notice from the app is that you access it via the Bovada website and then play through what is essentially a web app. You will then be promoted to save it to your home screen and from there it works much more like a traditional app, rather than a web app that just works through your iOS browser.

The app is pretty simple looking at first glance, but once you really start to pick away at it, it’s actually quite intricate. Once you’ve landed you get to choose between Zone poker and the cash game section. Clicking on either will take you into that lobby and then you can see which games are on offer.
​
On top of that you get to fiddle with your settings at the bottom, access to the cashier, bonus info and everything that you could need to get stated. One of the better apps for design and accessibility for sure! 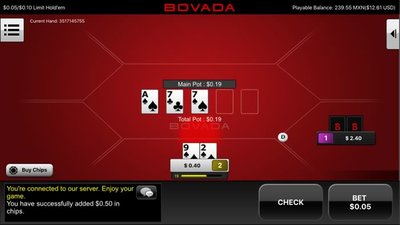 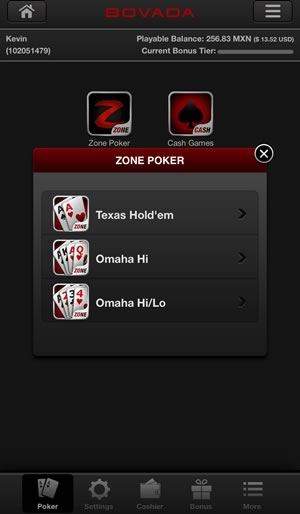 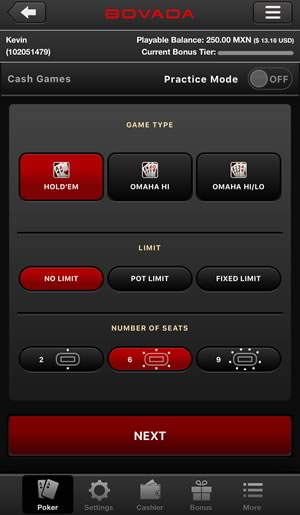 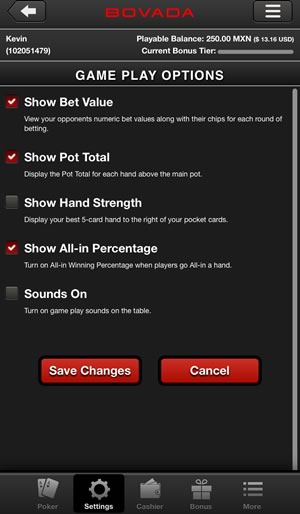 The first thing that has any note with Bovada these days is the inclusion of anonymous tables. This basically means you are able to play a new table as often as you want under a totally new name, making it almost impossible for other players to know who you are.
When playing on mobile you obviously have access to this feature as well, but it is worth noting that the games you play are the same as the games that you can access on desktop. This may sound obvious, but there are some poker companies that limit or keep these two player types spate, mainly down to design and accessibility issues.
​
Bovada have always been one for allowing players a totally unique and custom poker experience by offering them a ton of settings to fiddle on with, and the iOS app is no different. There are a few that are specific to mobile as well, so it’s not like they’ve just copied them across from desktop. Instead, they’ve gone out their way to make their mobile poker experience as good as it can be, which is highly commendable.
​

The app includes a great range of games to choose from. But, there are two omissions from the desktop site which come in the form of no sit and go or tournament games and no multi table support. The latter is pretty much a given, but we were slightly disappointed to only see cash games on offer.

That being said, they do offer both the traditional cash games and their super-popular Zone poker games as well. For those that don’t know, Zone poker is essentially Rush poker, where as soon as you’ve finished with your hand you move to a different table and get another hand almost instantly. There is no need to wait for the hand to finish and we think it’s definitely a game for the adrenaline junkies amongst you.
​
The cash games have a really good spread with Texas hold’em, Omaha and Omaha hi/lo all on offer. It’s actually been really great to see the Omaha formats being added to mobile, as again, this isn’t something you often see. Game types include fixed, no-limit and pot-limit. The downside is that you can’t actually choose your seat, and instead you are sat automatically. This has less effect on things given that anonymous tables are in play, but still, it should be a feature that’s included, for us at least.

The latest addition to the Bovada poker app is Sit & Go's and Multi-Table Tournaments.

US-facing poker rooms have been notoriously bad on mobile devices for longer than we care to remember. Sports and casino have been way ahead for some time now, so being brutally honest we had some trepidation coming into this review as we really wanted it to work.

The recent addition of MTT and Sit & Go tournaments has greatly improved the app and made it one of the best on the market.

The cash game selection is great though and it’s tough to really pick any flaws. The design of the app and the tables are all pretty much spot on, if a little dated, but best of all it functions and runs smooth as butter.
​
In summary, a great effort from Bovada and hopefully a positive stepping stone moving forward of iOS users.
Reviews of other recommended iOS poker apps.