PartyPoker are one of the biggest online poker rooms in the world.  Their mobile client is compatible with both Android and iOS phones and tablets.  Play regular Texas Hold'em cash games for real or play money.  Fast fold turbo poker games also available.

Party Poker has been one of the most influential poker companies within the online poker industry for over a decade now. The company quickly gained in popularity and is still seen today as one of the ‘founding members’ of online poker.  But times change, and none more so than poker! With that saw what was a massive poker room become almost wiped out by bigger – arguably better – forces such as Full Tilt and PokerStars.

What’s been interesting to see is how companies like Party Poker, try and get back to become one of the biggest online poker rooms in the world again. Can it even be done? Well, that remains to be seen, and is also for another article. One thing we do know is that all they can do is try to improve what they already have and their latest release has come in the form of their iPhone mobile poker app.

The app is a handy HTML 5 design which makes accessibility that bit easier, but for the purists, it is fully downloadable from the app store. Once more, this product tends to suit the smaller iPhone screens that little bit better than say apps designed with third party companies such as Java or even Flash (of which many aren’t functional with iPhone anyway).

The first promotion comes in the form of free £10 no deposit bonus. This is one of the most popular forms of promotions in the industry at the minute and basically requires you to simply open a new account before £10 is credited to your account to start playing. This amount won’t actually become withdrawable until you accumulate 20 Party Points and if you make a withdrawal before reaching the required number of points your bonus will become void.

The second is their new player bonus which means you can grab up to $50 in bonus money when you make your first deposit. This is based as a 100% match on your deposit amount between $10 and $50. You get 120 days to clear the bonus, but any withdrawal made before the competition of the clearing of the bonus will result in that bonus becoming void. The bonus will be released in 10% increments as and when you reach the required number of points.

First off, we just want to mention about how good this Party Poker app looks on the iPhone. We have recently reviewed the iPad version and were blown away by the aesthetics of the app. When coming into the iPhone review we were hopeful of the same, but with the limited screen real estate, you never knew how it was going to adapt. As the app is designed using HTML 5 it means it’s much more compatible with a wider range of devices, and this definitely runs true for its iPhone version. We have been lucky enough to test this on the new iPhone 5C and the retina display just makes it look amazing!

So the app takes you straight into the menu section where you can flick between choosing real money tables, play money games, fastforward (Party Poker’s version of rush/speed poker) and a preview tab. Additionally you can also choose from a handy Help section, Account information, Settings and Log Out button. We’d recommend that you have a quick flick through these before starting out as it does allow you to choose between some basic settings when playing the games.

The Real Money section is likely going to be the area that most will be looking for on the app, so let’s start there. Once inside you will get to choose between your game types, number of players at the table, stake and also see your account balance. Unfortunately the only game that is on offer via the app is that of Texas Holdem. But it’s a pretty common thing in the world of mobile poker, so we aren’t all that surprised to be honest. What we would be surprised to see is that within the next twelve months or so, more games had not been added to their portfolio.

The range of games is actually quite good with stakes starting at just 1c/2c and working their way up to $25/$50. Admittedly we don’t know how much traffic there is at those limits, but we would expect it to be limited. The biggest downside to the app, for us at least, is probably the lack of a lobby to game select or just at least see which games are running and how many. We did try several stakes at both 6 max and full ring games ranging from 1c/2c/ up to $2/$4 and every time we were able to get an active table. So this would suggest that traffic is pretty strong!

The fastforward games are where we had the most fun and these definitely work at a rate of knots. The mobile version didn’t take away from what these types of games are all about and the flicking between tables was almost instant, which we loved. The one thing that did let us down a little was the fact that some of the games had very few players, so a pool could potentially consist of just 5/6 players and at that point the format became pretty pointless.

The tables were the standout feature on the iPad version, and they are probably the same for the iPhone. They do look a little more cramped than their bigger brother, but that’s going to be understandable with a screen that’s about 5 times smaller.

Putting that to one side, the tables look pretty fantastic. The gun metal finish that Party Poker now adopts – still getting used to this after years of the green and cream – looks really modern and definitely something that we haven’t really seen before on any mobile app.

Most of all though, the tables functionality is really excellent and it’s easy to not only change settings at the table, but to make bets and enter bet amounts that you want, not just ones that are pre-set. We would have liked to see an area in which you could input your exact bet amount though, as the slider can be a little temperamental. 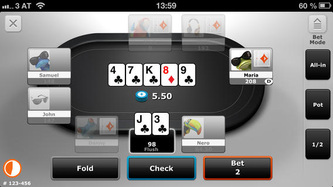 For many years, Party Poker has felt like a poker company that time had forgotten. But their once dated software has now been transformed into one of the best looking mobile poker games we have come across.

It’s not all style over substance though, which makes it even more appealing. The range of games is excellent in terms of stakes and tables, although admittedly to make this the best app in the market the inclusion of a least one other poker variant would probably be needed. But traffic seems pretty strong which is often a killer for a lot of mobile poker rooms.

The app is so good, that we spent a fair while when reviewing this product wondering if it could get any better than this. Ultimately, we decided that yes it could, but in terms of actual usability of the table and design, we weren’t so sure. What the Party Poker iPhone app will be is one of the leading lights in the industry; that is without question. All of sudden the once forgotten about poker room seems to be making a comeback and we for one, are delighted in hearing that.
VISIT PARTY POKER MOBILE - $500 BONUS
Reviews of other recommended iOS poker apps.