888 have succeeded in developing one of the best real money poker apps for iPhone and Android.  888 mobile players can enjoy Texas Hold'em or Omaha micro-stakes cash games,  Sit N Go and Multi Table tournaments at the second biggest poker room on the planet.

GUIDE TO AUSTRALIAN POKER
We no longer recommend 888 for iPhone due to the number of problems and issues with their iOS software.

888 is one of the online poker sites that never cease to surprise us – back in the day it’s been rather low in traffic rankings, while nowadays it’s one of the most popular rooms on the entire web. The success of 888 has been often attributed to the site’s readiness to introduce various innovations – and now that mobile poker is becoming increasingly popular, 888 is once again at the forefront with a shiny iPhone poker app that goes a step further than the products released by other industry giants.

you access to all the playing modes and allows you to adjust your options, go to the cashier page or check out the rules. When you’re happy with your bankroll and settings, you can choose whether you want to play Cash Games or Sit & Go Tournaments. You can toggle between Real Money and Practice Play tables using a simple switch located beneath the two main buttons, but don’t worry – it’s actually next to impossible to  make a mistake and start playing in the wrong mode. As always, I’m going to recommend starting out with play money games, as all the mobile poker client apps differ slightly in terms of user interface and you really should be proficient with the software before putting your hard earned money on the line, even if it’s one the beginner-only tables.

Fortunately, the learning curve isn’t particularly steep, especially since all the important buttons like bet, raise and fold are large enough to make choosing the wrong play by mistake extremely unlikely. What’s more, the 888 app allows you to talk to other players sitting at your table, but if you aren’t really in the mood you can always opt to disable chat and concentrate on the action. What’s more, you’re free to switch between the two- and four-color deck of cards, which is a neat addition given the fact that you’ll be working with a limited iPhone screen real estate.

If you opt to go for the cash games, you’ll be faced with a neat menu asking you to adjust your stake settings, the number of players and game type. The available options include short-handed and full-ring games in both No Limit and Fixed Limit variations. The stakes range from micro to medium, so high-rollers might be slightly disappointed – but then again such a choice is quite understandable, as high stakes poker isn’t exactly well suited for playing on the go. The Sit & Go tournaments on the other hand allow you to compete heads-up, short-handed or full ring with three different speed settings – all things considered, it’s an exceptionally well rounded package, especially for a rather small iPhone app. The only downside is that Texas Hold’em is the only game available as of the time of writing. Even worse, whenever you’re done adjusting your preferred settings you’ll automatically be assigned a table – so if you end up playing a bunch of tight opponents, you’ll be forced to disconnect and hope that the matchmaking system doesn’t place you in yet another awkward spot.

Thankfully, 888 are continually updating and improving their app.  The latest version offers players the chance to take part in Multi-Table Tournaments, including the ability to use tickets. 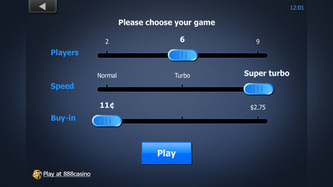 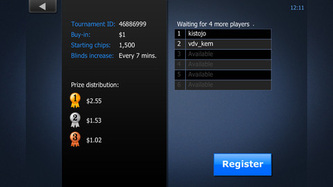 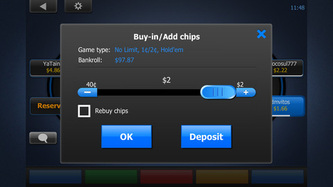 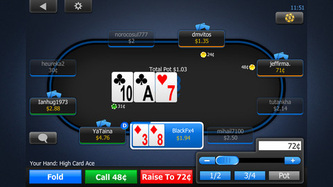 As you’d expect, the table mode looks as good as the lobby and offers unrivalled functionality. Telling the suits apart is quite  easy with both kinds of decks, but in all honesty I suggest going the four-colored way, since being able to tell the cards apart at a glance is really comfortable when all you have to work with is a small iPhone screen. The fonts are also big enough to be readable without a lot of effort and the games are surprisingly smooth for a mobile app, so in the end the table mode should be graded A+ in terms of accessibility and the overall feel of the games.

When it comes  to competition, 888 is rather soft. Nevertheless, consider yourself warned – you’re more than likely to meet a few regulars and players who generally speaking know what they’re doing. Fortunately, most of your opponents will be fish, so if you’re serious about playing the game you’re more than likely to turn your gaming sessions into a rather profitable activity. All in all, 888 is the perfect site if you want to hone your poker skills without being forced to go against the hardcore folks populating the largest poker networks.

If you feel like playing mobile poker 888 style, the first thing you need to do is actually getting the software package. Thankfully, the room’s website provides Apple customers with a quick link to the iPhone App Store, so setting everything up is extremely quick and convenient. Aside from the software package, you’ll need an 888 account. Fortunately, the registration process is also quite simple, but requires filling quite a few forms – so my advice would be to use your desktop computer since typing on an iPhone isn’t exactly all that convenient.

One of the things that really make 888 worthwhile are the generous bonuses available for new clients, including a welcome bonus of up to $400, which is a 100% match on your first payment and which is released in $10 increments as you advance your poker career on the site. What’s more, the room will give you £12 completely free if you’re a United Kingdom resident and $8 for players residing in no-deposit-bonus approved countries, such as Austria, Australia, Brazil, Belgium, Cyprus, Canada, Denmark, Finland, Greece, Germany, Ireland, Japan, Kuwait, Luxembourg, Lebanon, Malta, Netherlands, Norway, New Zealand, Russia, South Africa, Spain, Switzerland and Sweden.

All in all, the 888 Android app is a great entry on the ever more crowded mobile poker market. Obviously, you shouldn’t download it expecting the full functionality of a desktop-based client, but it does an amazing job at bringing you what’s best about the 888 experience for a program allowing you to play poker literally from anywhere in the world while using nothing more than your cell phone.

Unlike the developers of other, similar apps, the people standing behind 888 apparently never forgot about the limitations of the devices their product was to run on, and the end result is simply superb. The whole package feels super-tight and is exceptionally accessible, while the mobile-friendly design makes it easy to use and navigate. You won’t find any unnecessary features here, as everything has its place which, along with a soft player pool, makes it one of the best Android poker apps currently available.
Reviews of other recommended iOS poker apps.